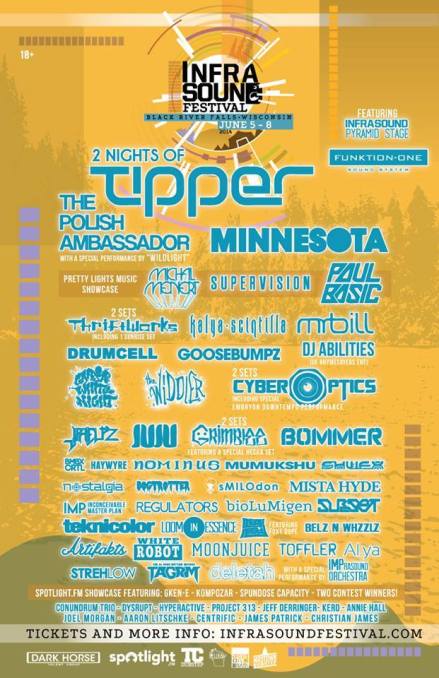 In the passed few years, we’ve seen a lot of new music festivals pop up across the country. It’s not much of a surprise, but sometimes the true gems can get lost in the mess. Infrasound Music Festival, now in its third year, is one Summer event that offers an experience like no other. With a seamless lineup and beautiful landscape, the festival molds an experience for its campers that is truly liberating and irresistibly heart-warming.

The festival’s main event has come to be two back-to-back nights featuring sets from the legendary UK producer and DJ Dave Tipper (Tipper), who will once again return this year, for his only performances in the Midwest United States for the Summer of 2014. Even while concentrating on electronic music, Infrasound offers a massive diversity in sound from its musicians. From the tropically funky beats of The Polish Ambassador (originally from Philadelphia, mind you), to the bass tackling assaults of JPhelpz, to the psychedelic entrancements of Kalya Scintilla, to the light-hearted swinging beats of a Pretty Lights Music showcase featuring Michal Menert, Paul Basic and SuperVision, the festival undoubtedly finds a place for any electronic listener’s niche.

One factor that you can expect from Infrasound 2014, and that you won’t find many places elsewhere, are these multi-night sets from various producers. This is something we have seen from jam bands over the years at various festivals, playing multiple sets over multiple nights. But Infrasound gives the electronic musicians a chance to lend their hand to this. On top of Tipper’s performances (one regular, one downtempo) you can catch multiple sets this year from Cyberoptics (also performing a downtempo set), Thriftworks (also a Philly native!– doing one sunrise set), Grimblee (one downtempo set), and just announced, Ganja White Night (one live set, one DJ set).

Be sure to checkout below the official recap of Infrasound 2013, as well as selections from just a few of this year’s Infrasound artists!