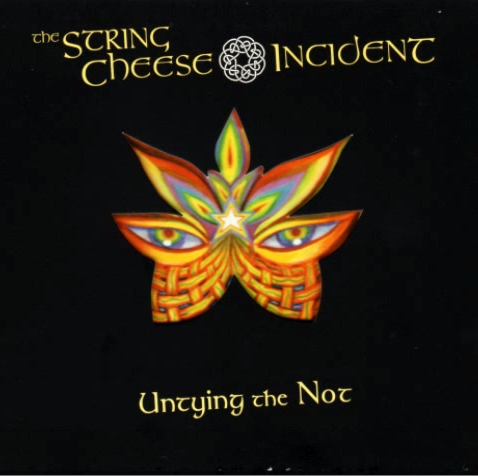 When looking back on 2003, it’s hard to think of anything too significant besides, perhaps, the creation of Homeland Security (you know, if you care about that type of stuff); but, that’s not the case for fans of the Colorado bluegrass/jam group, the String Cheese Incident. September 23rd, 2003 marks the date the String Cheese Incident released their fourth studio album, Untying the Not (overall sixth album, including the 1998 live album Round the Wheel, and the collaborative album Breathe with Keller Williams, collectively as the Keller Williams Incident), which is arguably the group’s best album to date.

Showing clear influence from guest producer Martin Glover, a.k.a. Youth, Untying the Not shows a different side of the String Cheese Incident.While the group’s previous studio releases held a more uplifting vibe, this one carries a much slower and almost eerie vibe throughout, speaking on topics such as life, death, and self-realization.

Untying the Not flows from track to track perfectly, as if each song is a piece of a greater puzzle, telling a story like no other. The record takes its listeners on a rollercoaster of emotion, full of crazy twists and turns. Songs such as “Sirens” and “Tinderbox” provide a darker, heavier feel, while tracks like “Orion’s Belt” and “Elijah” serve to mellow the listener out via the sweet, smooth sound of saxophone and violin working together in perfect harmony.

The 2003 album also introduced listeners to the String Cheese Incident’s electronic side with the deep spacey rhythms of “Mountain Girl” and the Irish-folk inspired tune, “Valley of the Jig”.

With everything going on throughout this record, it’s difficult to remain unimpressed. The String Cheese Incident showed fans that there’s far more to the group than just long, ear-pleasing live jams. Throughout the album, the group proves that not only are they talented on stage, but also equally (or perhaps even more) talented in the studio as well.