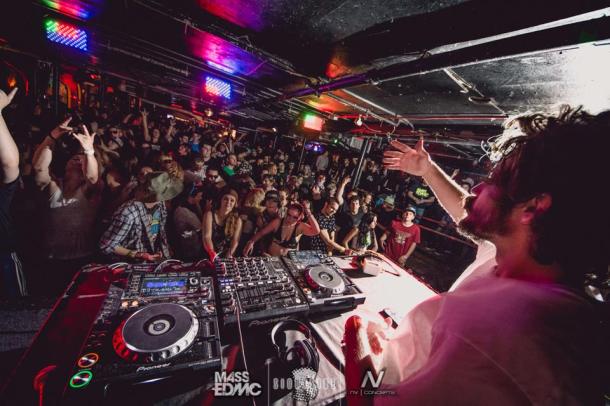 A bass dragon lurks over the underground. A dark lizard soars over the scene and regularly drops bangers from above. He is the dreaded and dank, the revered and feared. His name is SQUNTO, and if you have heard him, your consciousness may or may not be intact.

Combining crusty, growling synth lines, heavy drums, and influences from across the low spectrum, SQUNTO has been letting the hammer fall all over the United States, as well as Europe and Australia. He just dropped his STAY LOCKED II EP as a free download, and it is a force from another world.

The SQUNTO project is one of the many focuses of Eric Roth, a man of many talents, from music production to longboarding, and some crazy stuff in between. I got the chance to ask the man about his music, passions, and future plans for the movement.

Plus be sure to catch SQUNTO destroying not two, but four- yes you heard me correct, FOUR– decks at Altered States at Silk City on November 15th with Subtronics and Satori. Complete event details and tickets HERE.

Funkadelphia: “You dropped out of school to pursue music, and now it’s pulling through. What told you to make such a bold move like that?”
SQUNTO: “I was horribly unhappy at college. I’ve never been an academic, and everything came to a crescendo during my experience with higher education. After being ‘academically severed’ post freshman year for getting a .75 GPA second semester, I realized I either had to commit to learning or leave and make my own path. After deciding to give it another shot and being readmitted after writing a swagged-out letter, I knew for sure that college was not for me. All my feelings were telling me to drop out and I knew I had the ability to make music work. So here I am!”

Funkadelphia: “You recently came public with your intent to start a sober movement within dubstep. Many people have questions about what your exact intents in doing this are, and I think their questions can summed up to this: are you taking a jab at drug culture, or is this more just a way to open more avenues for the genre?”
SQUNTO: “It’s both, and much more! It’s quite problematic that drug use is so present within bass music culture, within all music culture really. I feel that too many artists more or less acquiesce to what is already there for them, the crowds, the scene, the culture, and they don’t really attempt to truly make an impact on what they’re participating in. I want to change the world, and a good starting place is with what I’m doing now as an artist. My overall intent with the SQUNTO project is not solely to get a bunch of bassheads to rage harder than they ever have before without drugs, but is to create a conscious movement that can positively impact the whole planet. It is my goal to contribute to the conscious transformation of Earth in every way I can, and that begins by creating a culture that I can spread and market through my presence as an artist. Sobriety is important, but it is not the end game, it is simply part of an overall conscious and spiritual lifestyle that I aim to promote through the SQUNTO project.”

Funkadelphia: “Would you say that sobriety is something that should be taken in all aspects of life, at all times, or just in EDM?”
SQUNTO: “I feel it’s generally a good policy. I’m all about personal freedom, so it’s really up to the individual; however, a clear mind and a healthy body never hurt anyone!”

Funkadelphia: “Do you believe in prohibition?”
SQUNTO: “Definitely not. Historically it’s very problematic, and more or less promotes what it is banning, and countries that have legalized all substances have seen massive reduction in drug use!”

Funkadelphia: “You’ve been throwing mega-bangers from Australia to France to Montreal. What is it about your intense and even obliterating brand of dubstep that seems to appeal to people of all walks of life?”
SQUNTO: “The biggest strength of my brand at the moment is my mixing.  I’m pretty sure it’s 90% of the reason I’ve been getting all these crazy bookings. I take my DJ’ing just as seriously as my production, if not more. I spend a lot of time every day practicing on 4 decks. Finding new multi drops, practicing my routines, and generally making sure I stay in practice on CDJs is very important to me. There are a ton of INCREDIBLE producers in the game right now, its mind boggling really. There’s so much content and amazing new music coming out all the time that is very hard to stay relevant. My biggest strategy for keeping up in this highly competitive scene is by pushing other aspects of my brand! When I play live I like to drop almost 100% double drops and mashups. Not many artists play out in this style, so my sets tend to really stick out and leave an impression on audiences! Besides that, I push a lot of conscious content and generally have a fairly unique brand and online presence.”

Funkadelphia: “I’ve been very intrigued by another one of your ventures, SqunTch. Unfortunately, I know nearly nothing about it. Can you explain SqunTech to me?”
SQUNTO: “SqunTech is the technology brand of the SQUNTO Worldwide Umbrella. Currently it encompasses crystal energy devices and speaker technology, however it is limited only by my imagination. It is not something I am focusing a lot of time and energy on at the moment but it is always on the backburner. I eventually aim to have a comprehensive product line that includes metaphysical energy devices, speakers, clothing, playback systems, and much more!”

Funkadelphia: “You are hands down the best longboarder I’ve ever seen throw down. You still pushing wood like a beast?”
SQUNTO: “Not as much as I used to. I still love to skate but music is the hustle what I’m dedicated to these days. Shouts outs to Nelson Longboards! Go check em’ out. Loads of my very close friends and downhill buddies are holding it down in my place though. My buddy Norman Plante who I got into skating with is now one of the best downhill skaters in North America (he might disagree but everyone knows it’s the truth), and the crew I had a hand in co-creating, “Team Mids,” has now reached an astonishing level of international fame and notoriety. I think I still have a few banger skate videos left in me. We’ll see what next season brings!”

Funkadelphia: “Thanks for the opportunity, bud. Keep dropping that hammer.”
SQUNTO: “Big ups man! Thank you so much for the interview and interest in the SQUNTO project. May your path bring you peace and fulfillment!”