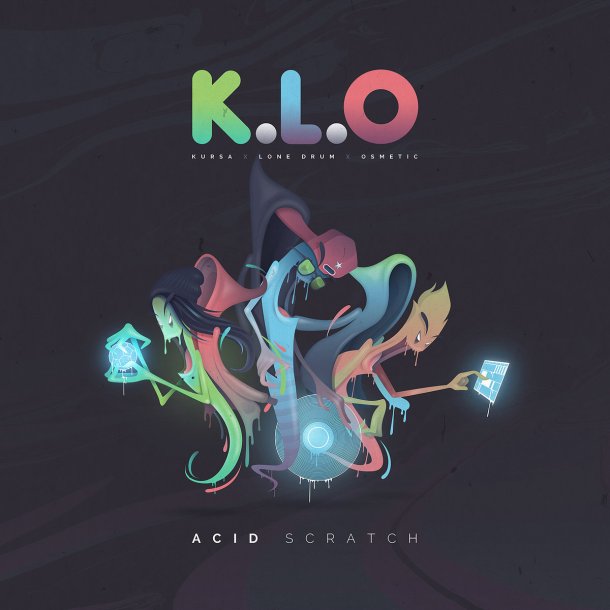 If you have a set of ears that just demands the most peculiar of beats and contorted of sounds, then allow Kursa, Lone Drum, and Osmetic to deliver the goods. Coming together for the new album Acid Scratch under the title K.L.O. the trio is quite punctually bringing a new standard to the world of twisted bass noise. It could not be a better time either with attention in North America garnering toward more experimental producer motives each passing day.

Although, any familiarity with just one of these London musicians brings the knowledge that such an increasing demand was definitively not the driving force behind this new record. All three of these abstract audio engineers has been hard at work at their craft of psychedelic undertow for what could be considered a more than impressive artistic career when tallied together.

Sometimes a situation demands pointing fingers and referencing of examples. In this situation, it is hard to avoid the likeness to such rising producers as Dave Tipper. This particular comparison holds ground through Acid Scratch via the consistent juxtaposition of vivid production and exceptional live scratching apparent in the album. After a relatively recent explosion into the forefront of the North American electronic music scene, Tipper has exposed a vast amount of people in this time frame to live “DJ” performances that put the true meaning of “disc jockey” back into the abbreviation.

This is not to say such a phenomenon has been the sole source of K.L.O.’s inspiration to fuse the two elements likely on Acid Scratch. The two realms of breakbeat dance music and hip hop have always played off one another, each’s influence consistently being well-recognizable in the other. It is the perfection and dedication to this fusion that should truly be the topic of discussion in the scenario of K.L.O. Getting together three artists as talented and inquisitive as these three is sure to end in prolific results, but with this new piece of work, Kursa, Lone Drum, and Osmetic show they are never the type to settle for any less than their absolute best.

Thickly riddled with crisp sound design and astoundingly dense layers of atmospheric audio, Acid Scratch is not only pleasant on the ears, but it is a much-needed step in the world of bass music. The record leaves promise for an enthralling live performance mixing together the group’s jaw-dropping production ethic with their disc jockey prowess. Finding solace in glitch-driven percussion, the trio’s compositions measure well up to any of the world’s heaviest hitters when it comes to unraveling, off-tempo, bass beats. With this piece of work now on the table, all that is left to do is sit back and wait to see how the rest of the musical world will attempt to retort.

K.L.O. is just one of the many buried gems in this year’s Infrasound Music Festival lineup. Those attending the 2016 festival should consider themselves in for a special treat with the opportunity to see the trio’s live performance.